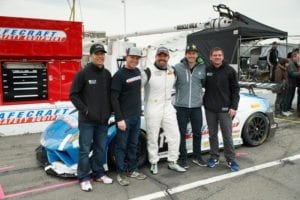 Willows, Calif. – The NASA 25 Hours of Thunderhill, known as the longest road race in North America, ended with CLP Motorsports’ owner Pat O’Keefe bringing home its Lamborghini Super Trofeo #14 and placing 3rd (ES Class) and 5th Overall after the team completed over 700 laps on the 3-mile raceway. To commemorate CLP Motorsports’ outstanding teamwork of the crew including All-Star drivers Tyler McQuarrie, Tanner Foust, Marc Miller and Tom Dyer, Safecraft Safety Equipment, one of the team’s sponsors, will dedicate a bridge in honor of the group “Surviving the 25” at Thunderhill Raceway. 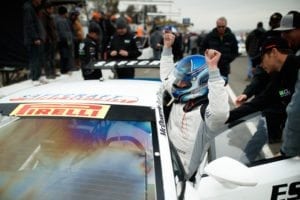 “What an experience! Our team finished strong and we ‘Survived the 25’ proving once again what a great team we have, demonstrating enduring stamina and ingenuity. Despite minor setbacks, we had a lot of fun and even accidentally invented the “Franken-Muffler” – 9 mufflers welded together and added the day before the race to reduce the noise level from 111 decibels to 97 to qualify> 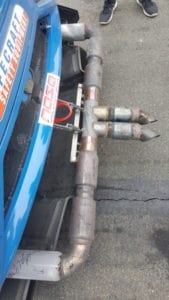 It may not be pretty, but it worked! In addition to the Franken-Muffler, we wanted to leave a more permanent and memorable legacy—keep an eye out for the “Safecraft Bridge” at Thunderhill to commemorate the team’s hard work!”

“Big congrats to the entire CLP Motorsports team and crew for all their hard work! Also hats off to the drivers for not only finishing the 25 Hours of Thunderhill but for getting the Lamborghini home in 3rd place after completing over 700 laps!”

“The 25 Hours of Thunderhill was fantastic! To take our Lamborghini Gallardo Super Trofeo on its first outing and finish on the podium is an amazing accomplishment and I’m grateful to CLP Motorsports for inviting me to join the team. Endurance racing is a new challenge for me and I can’t wait to do it again soon.” 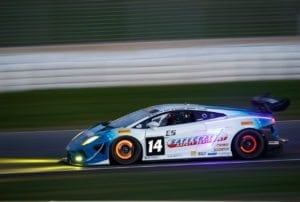 “Completely enjoyed my morning stint….and when it was all said and done, our Safecraft Lamborghini Gallardo finished about where it should have. 3rd in ES and 5th overall running respectable lap times. We took a sprint racer to an endurance race and though we had a few hiccups with the fuel and brake systems, the Lambo ran strong and the CLP Motorsports crew was on point throughout. Huge thanks to the team for welcoming me back and would go into battle with Tyler, Tom, Pat and Tanner any day. We had a blast, stayed positive and had lots of laughs and that captures the entire spirit of this NASA 25 Hours of Thunderhill event. Looking forward to coming back next year and taking a run at the overall with these guys!”

“We made it! Finished P3 in class and 5th overall & “Survived the 25” again with the awesome Safecraft/CLP Motorsports team. The car needed some glue to hold it all together and it worked! Awesome job to my guys and teammates for making it happen and getting to the finish. Honored to be a part of this effort!

We knew our main competition at the 25 Hours of Thunderhill would be Flying Lizard [placed first—ES Class] and it was fun to race them throughout the race. Congrats to their entire team on their win! Until next year!”