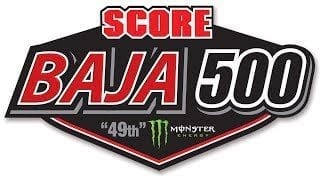 Ensenada, Baja California, MX—Safecraft’s Team driver Larry “The Legend” Roeseler won the Baja 500 Trophy Truck Legends class making it his 17th class win – and now his 11th Overall win. This year’s race covered 513.67 miles through the Mexican desert, beginning in Ensenada, across the Baja peninsula to San Felipe, and then a return loop west to the finish line in Ensenada.

“After starting 14th, we were inside the top 10 overall and looking good on time, maybe 2nd or 3rd by race mile 200. But soon the “Baja race gods” had other plans for us,” said Roeseler.

“A broken throttle return spring– nothing major– but soon followed with a rear flat and some brake issues. By race mile 300–still ok, passing for position (6th), we hit a big tree resulting in a front flat and much body damage,” added Roeseler.

“The brake issues became much worse and oil pressure had dropped on the engine. We made it to Pit 3. There, the team worked on the truck for about 12 minutes. Repairs were done and plenty of water for myself since it was 100 + degrees! From there, it was clear sailing to the finish– 8th overall, 30 minutes off the winner. Super happy with that and the entire teams’ efforts. Winning the Trophy Truck Legends class makes this my 17th class win in the Baja 500– 11 of those being ‘Overall’ wins.”

“We congratulate LR for his awesome win,” said Pat O’Keefe, president & CEO of Safecraft. “LR’s accomplishments in off-road racing are truly impressive. He continues to play a significant role in the development of Safecraft’s off-road program and award-winning fire suppression system for the UTV market. It’s no wonder he’s considered ‘The Legend’ in many circles.”

Safecraft Safety Equipment is the leading provider of fire suppression systems and is used by most of the top professionals in a wide range of industries including Motorsports, Automotive, Aviation and Marine. For over 20 years, Safecraft is known for its innovative design and use of the highest quality components available.

Safecraft extinguishers are used by more NASCAR, NHRA, NASA and SCCA teams than any other brand and is the only manufacturer to offer several models of extinguishers and extinguishing agents approved to SFI 17.1

Larry Roeseler is an American professional off-road racer in motorcycle and Trophy Truck classes. He is a 13-time overall winner of SCORE’S Baja 1000, and has also won numerous times in the Best in the Desert Series.  Roeseler is 2-time overall winner of the Las Vegas to Reno and has numerous American Motorcycle Association off-road titles including National Hare and Hound and National Enduro championships.  Larry Roeseler is a Hall of Fame Inductee of the American Motorcycle Association and an Off Road Motorsport Hall of Famer. “…the greatest multi-discipline SCORE desert racer in history.” http://score-international.com/legends-larry-roeseler/