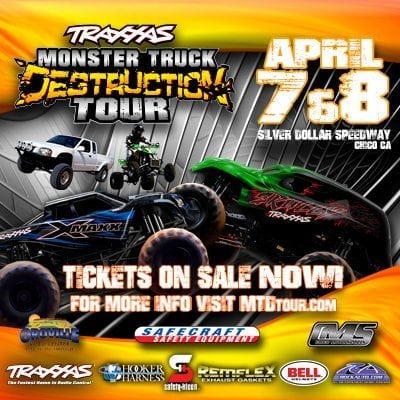 Pittsburg, Calif.—  Safecraft Safety Equipment’s CEO and veteran racer Pat O’Keefe and team racer Tyler McQuarrie, best multi-purpose driver, will get behind the wheels of Monster Trucks, Tuff Trucks and – yes—even Lawn Mowers! —at the Traxxas Monster Truck Destruction Tour (MTDT) in Chico, Calif. on April 7-9.  The MTDT event, sponsored in part by Safecraft and held at the Silver Dollar Speedway, will commemorate Safecraft’s #RaceEverything campaign, underscoring the fact that Safecraft fire suppression systems can be equipped in ‘everything’ (i.e. race vehicles) in the motorsports industry.  2017 marks the second year of the campaign and O’Keefe and McQuarrie will #RaceEverything including NASCAR, ARCA, IMSA, Trans AM, SCORE Baja and Off-Road races to prove the point.

“I’ve been very lucky throughout my career to race pretty much everything on four wheels—and with the Safecraft #RaceEverything campaign, I have EXCEPT– for a Monster truck!  I can’t wait to get in and experience something I’ve been watching since I was a kid,” said Tyler McQuarrie.  “It’s pretty cool to be doing it in Chico where I lived while going to Chico State. I have many fond memories of the amazing town of Chico and this experience at the Monster Truck Destruction Tour will definitely add more.”

“This will no doubt be an epic experience—not just in the sheer size and magnitude of the truck, but the bigger impact, personally,” said Pat O’Keefe.  “I’m used to racing our Safecraft cars and trucks, sitting in small cramped quarters and enduring hours of endless track or tackling dirt over hundreds of miles—driving a Monster Truck at the Destruction Tour in Chico will be totally fun and exciting on so many levels.   I’m looking forward to it.”

Spectators and fans at the event have a chance to win Safecraft gear packs, Tshirts and autographed items throughout the 2-day event.  For more information and to buy tickets, visit www.monstertruckdestructiontour.com

Safecraft Safety Equipment is the leading provider of fire suppression systems and is used by most of the top professionals in a wide range of industries including Motorsports, Automotive, Aviation and Marine.  For over 20 years, Safecraft is known for its innovative design and use of the highest quality components available.

Safecraft extinguishers are used by more NASCAR, NHRA, NASA and SCCA teams than any other brand and is the only manufacturer to have 4 models of extinguishers and several different extinguishing agents approved to SFI 17.1

Pat’s successful corporate career as President and CEO of Safecraft Safety Equipment,  President and CEO of NeXgen Fuel, Vice President of Golden Gate Petroleum and CEO and President of CLP Motorsports had its humble beginning as a successful racer in his youth.  His passion for automobiles and motorsports lead to an impressive racing career starting at the age of 12 where he has since raced anything with an engine including jet skis, boats, motorcycles, karts and cars with NASCAR, SCCA, NASA, IMCA and others.  Pat acquired Safecraft Safety Equipment adding a valuable driver’s perspective in the continuing development of innovative fire suppression systems for the racing industry.  Pat started CLP Motorsports after realizing the need for a world-class customer focused motorsports shop. He started NeXgen Fuel by recognizing the need to meet customer’s demands for a high quality, clean-burning, high performance premium renewable diesel.

Tyler McQuarrie grew up in Walnut Creek, CA and started racing karts when was 14.  He won the Formula Russell Championship and the Russell Triple crown in 1998.  McQuarrie is the 3rd and only American to win the World Scholarship in England and then spent 2 years racing formula Vauxhall in Europe.  He has also spent time racing USF2000, American LeMans, USAC Sprint cars and NASCAR West Series.  McQuarrie has since become one of the top drift drivers in Formula Drift and is also one of the best multi-purpose drivers in the country. In 2016, Tyler competed in Formula Drift, Trophy Truck, Stadium Super Trucks, ARCA, IMSA and Trans AM as part of his #RaceEverything campaign.  Tyler is also Safecraft’s field marketing and research and development manager.  He travels the country delivering safety seminars at driving schools, racetracks and tradeshows.