Prairie City, NV—Safecraft Safety Equipment’s Off-Road team demonstrated a full show of effort and “Scherer” determination which landed Casey Scherer (#79) 1st place in the winner’s circle in the 4900/UTV Class; Wayland Campbell (#3) with an impressive 2nd in Class 4400 and Jason Scherer (#76) winning the heat race despite overwhelming challenges and obstacles at the 2017 MetalCloak Ultra4 Stampede.

“I couldn’t be happier with the results,” said Pat O’Keefe, president and CEO of Safecraft. “Everyone gave it their all with driven determination despite challenges and obstacles—no matter how big or small.   Not giving up makes us all winners.”

Here’s a race recap of the obstacles Jason Scherer faced this weekend:

We had a cylinder full of water before practice and worked on the engine. We missed qualifying and practice, so we had to start in the back if we can piece it together.

Our amazing team JB welded the intake over port (not done by the engine builder), and put the head back on the motor by 2:30 am. Adam and Mike from Safecraft, as well as Brian Whitford were back at it at 6 am to test it. Finally, it’s ready to race!  We started in the very last spot from missing qualifying and practice, so my first lap on this 2-mile track will be in race conditions thanks to the entire Rage 4th crew. Brett and Chad Lujan, Ole Strogesberg and Dan Trout had been jamming on this and I wanted to let them know it was all worth it.  Pressures on!!!!

Sometimes solving one problem can cause another unforeseen issue and that’s what happened on the Safecraft, Rubicon Express Nitto Tire #76 at Round 2.

“We did so much work to the car to change the setup from a desert car at Round 1 in Sierra Blanca, TX to get it ready to race short course at Hangtown and it was a rocket ship on the track.   Unfortunately, we had a belt melt that runs the oil pump and had to pull off while in the lead and just a couple laps away from the checkers” said Jason Scherer after the race.  The belt wasn’t a maintenance issue and no fault of the team’s; just a new part that was being developed to prevent debris from entering the belt. By sealing it, the heat created caused the belt to melt apart and fail.  “That’s part of being on the leading edge– sometimes it’s also the ‘bleeding edge’ and we can live with that knowing we are pushing the car to be the fastest.”

I can’t thank my guys enough for all their hard work leading up to the race.  They put in 20+ hour days for over a week.  Adam McGough, Dan Trout, Michael Von Disterlo, Brian Whitford, Brett and Chad Lujan and the rest of the Rage 4th crew put in so much effort to get to the winner’s circle this weekend. It was a shame to let them down, but at least the car was able to start in the back and go to the front and had a real shot at the win had the belt stayed together.

We’ll be back for the Fallon 250 in Nevada on September 1st and will have some extra desert experience racing in the Safecraft #96 Trophy Truck a few weeks before from co-driving for the BITD Vegas to Reno race. 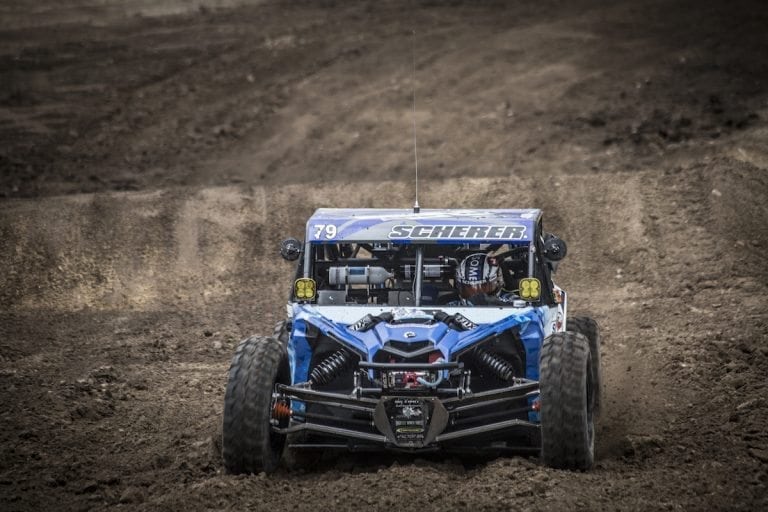 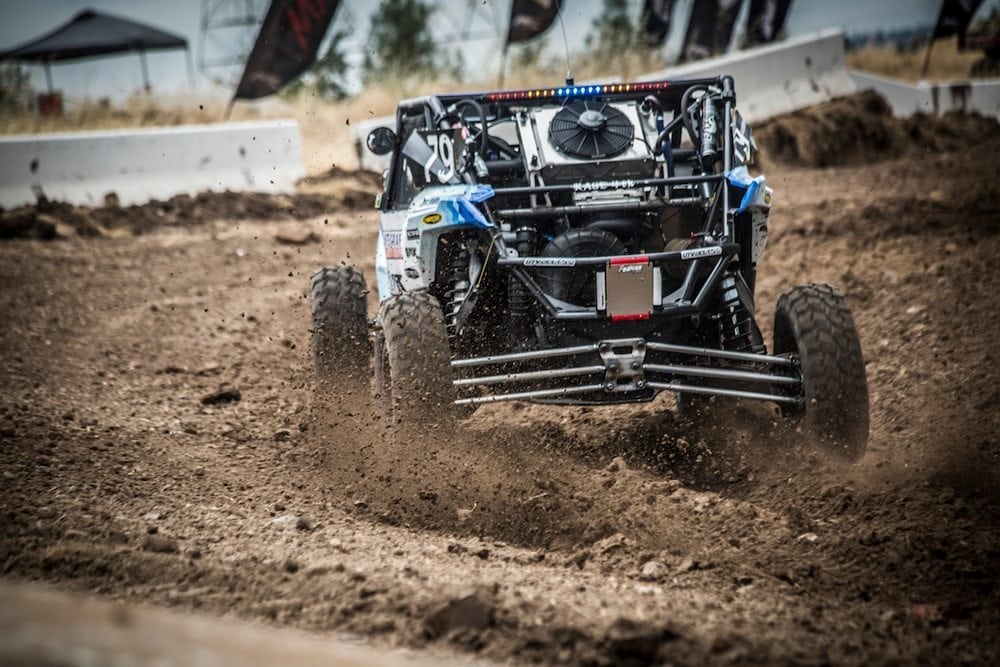 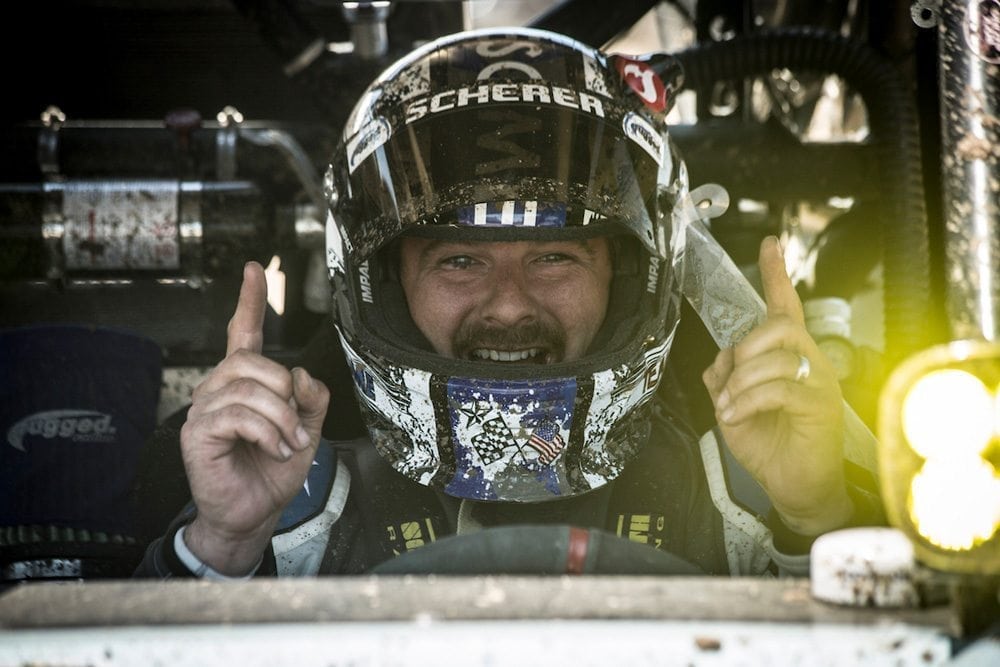 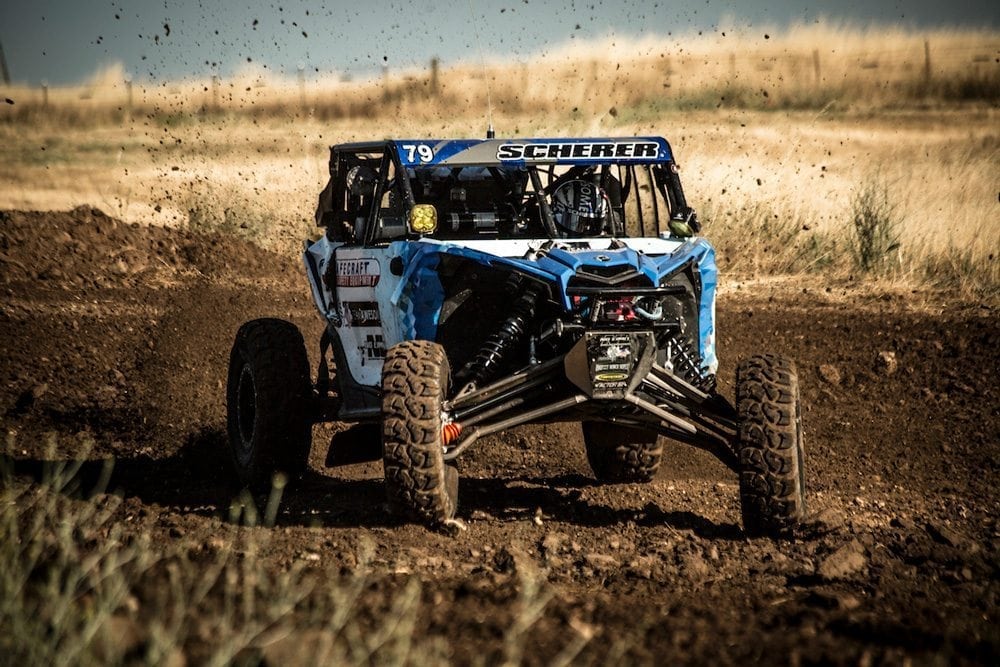 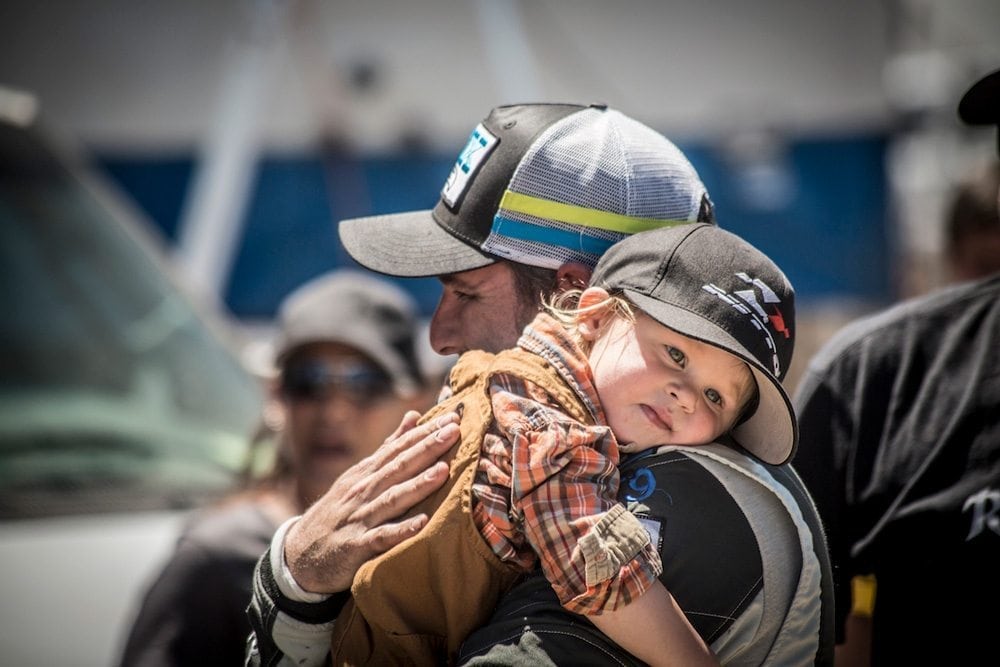 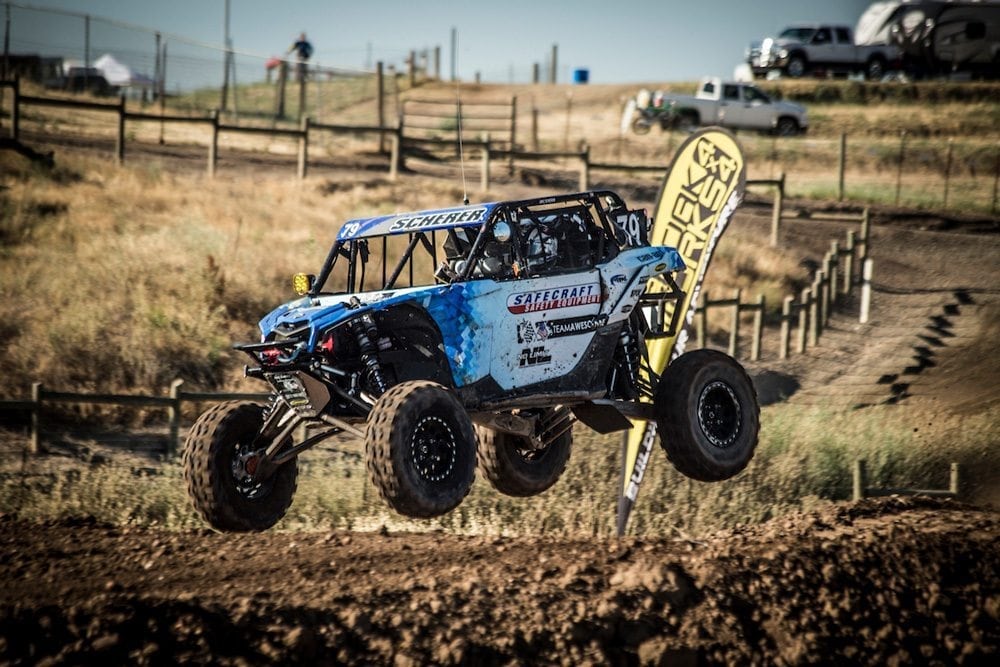 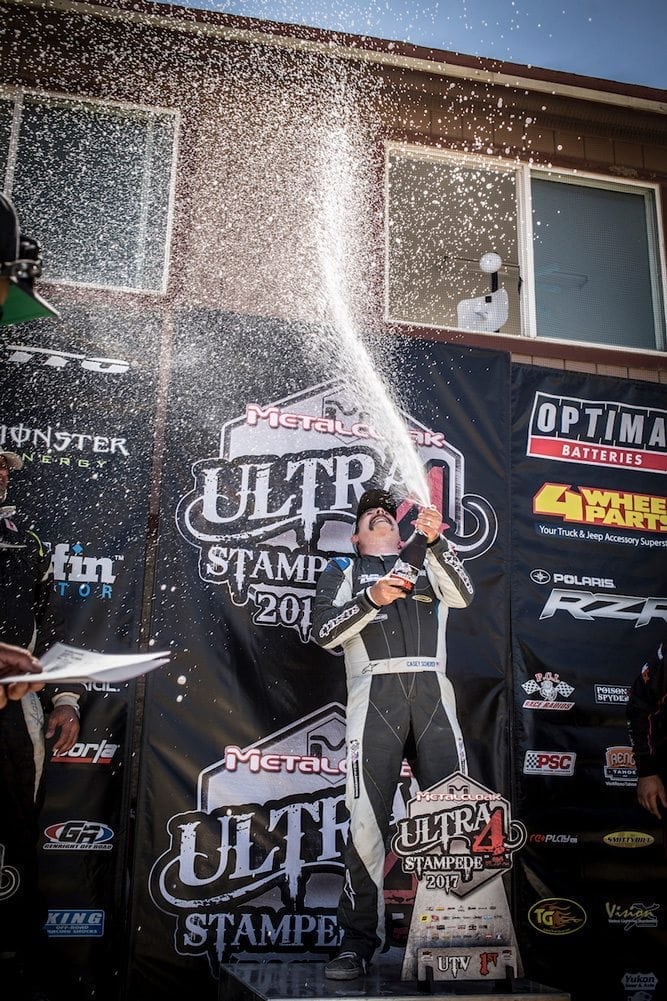 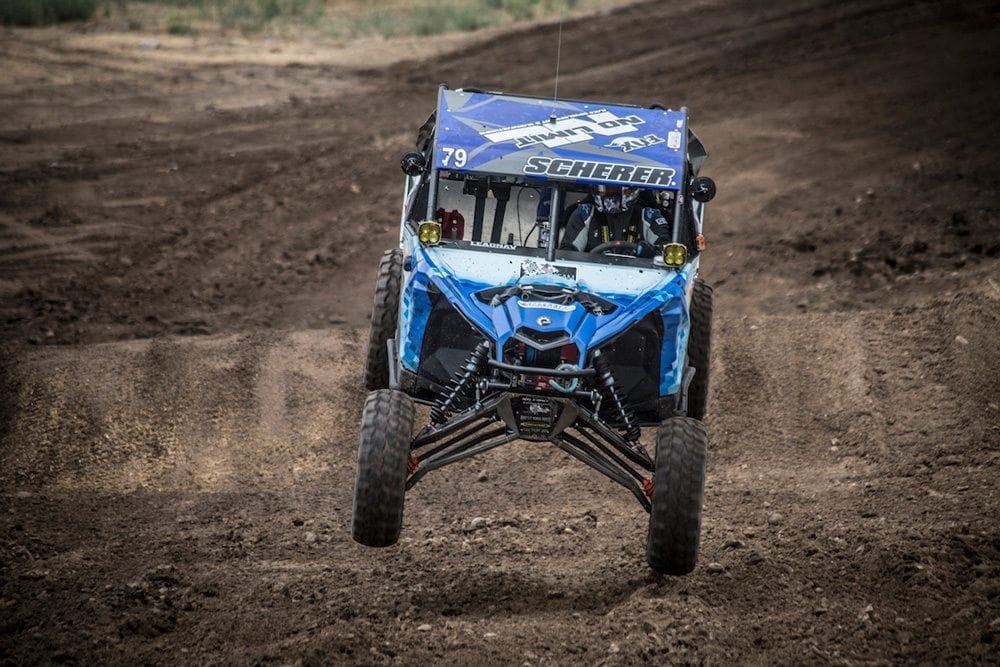 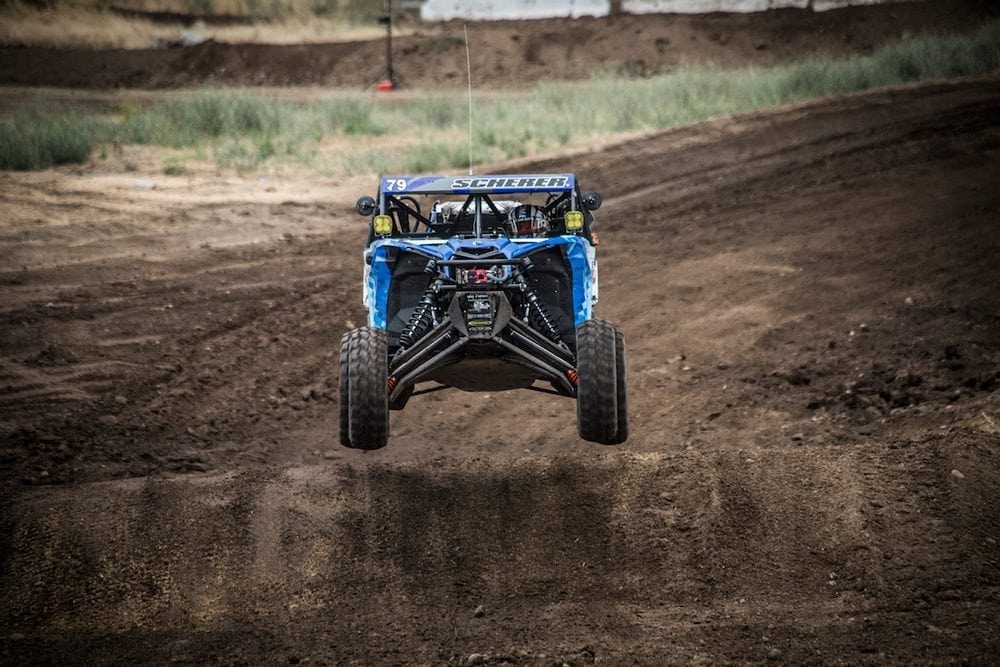 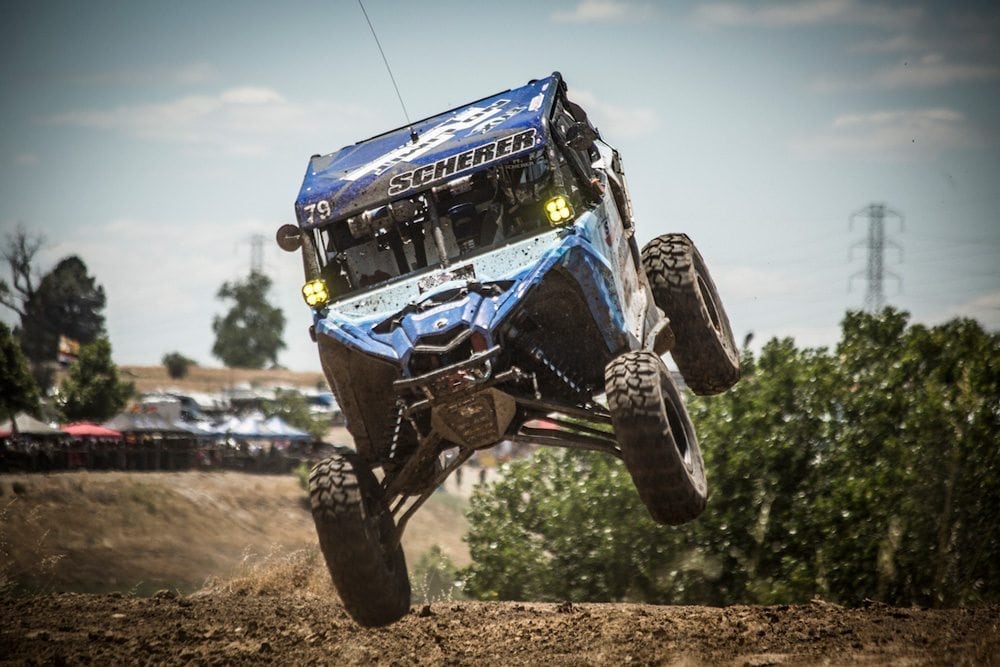 Safecraft Safety Equipment is the leading provider of fire suppression systems and is used by most of the top professionals in a wide range of industries including Motorsports, Automotive, Aviation and Marine. For over 20 years, Safecraft is known for its innovative design and use of the highest quality components available.Safecraft extinguishers are used by more NASCAR, NHRA, NASA and SCCA teams than any other brand and is the only manufacturer to offer several models of extinguishers and extinguishing agents approved to SFI 17.1 Visit www.safecraft.com for more information.

Casey Scherer has been into racing since he was 8 years old. Starting with BMX he loved the feeling of competition. Over the years Casey has raced Shifter Karts all over the world, He also drove two seasons in the NASCAR Wheelin series in northern California. Casey has finished the longest road race in the world competing in a late model stock car in the 25 hours of Thunder hill. Some other attributes include finishing first place in the 2015 season NCRR series in the pre runner class taking home 2 wins and a second. Casey’s love for racing has brought him many victories over the years. In 2009 Casey and his team won the Jim Russell 4 hour Karting endurance at Sears Point in a factory Track-magic Kart. Driving is his love and can’t wait to get behind the wheel at the 2017 King Of The Hammers in the UTV class. He will be piloting a 2017 Can Am Maverick XRS and hopes to take the Class win.

Wayland has competed in Motorsports since 2012 from Rockcrawling, Rockracing, Short course and UTV racing.  In 2015 he was acknowledged by the Offroad Motorsports Hall of Fame and received the “Rising Star” Award.  Wayland competes in the 4400 Class of the Ultra4 Racing Series.  In his first full season of Ultra4, Wayland took the title for Ultra4 West Coast Series Points Champion. In 2015, Wayland switched over to a single seat car and has progressively moved up the ranks.  This year at the 2017 King of the Hammers, Wayland pushed his dad all the way to the finish line taking 2nd place on the podium for both the 4400 race and the UTV race.  He has continued to stay on the podium with a 1st place finish in Texas and a 2nd place finish in Oklahoma.  For the last two years Wayland has split driving duties with his dad for the Baja 1000.  For the 2017 Baja 1000 50th Anniversary, Wayland will once again sit in the driver’s seat along with his dad and sister.

Jason Scherer has been racing for over 18 years and has stood on the podium at many events winning one of the most prestigious events: The 2009 King of the Hammers. He also has a top 25 finish in 7 King of the Hammers races since 2008 and won the 2012 and 2013 Ultra4 Nitto National Championship Race, 2013 Metalcloak Stampede and 2016 Fallon 250. His consistency and race car set-up is proven winning the 2016 Ultra4 National Points and Pro-Rock Championship in 2006, repeating in 2007. Jason’s growing list of high profile finishes have earned him the honor of being nominated for Dirt Sports “Driver of the Year” award two years in a row. Scherer embraces his racing career with a very supportive wife and children who join him on the trails of Northern California in their 1972 Jeep CJ-6.